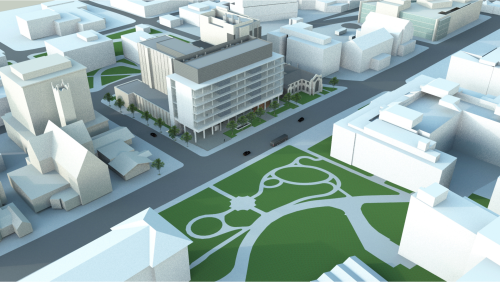 On Nov. 11, the State of Wisconsin Department of Administration signed the contract for the design phase of the Chemistry Building Project. Design work now begins in earnest.

The design team includes Ballinger (Philadelphia, Pa.), Strang, Inc. (Madison, Wis.), Aro-Eberle Architects (Madison, Wis.), and Affiliated Engineers (Madison, Wis.). Ballinger and Aro-Eberle had previously conducted a master planning study for the project. Ballinger was also the architect of record for the nearby Discovery Building, an interdisciplinary research center completed in 2010. All of the contracted firms bring experience designing scientific spaces and buildings.

Department of Chemistry’s Facilities Committee will work with a variety of groups over the coming months to discern what types of learning spaces will best accommodate the needs of current and future chemistry students.

In August, the UW System Board of Regents voted to include the project in its 2015-17 capital budget request. In the spring, the project will officially move forward if the State of Wisconsin Building Commission votes to fund the instructional portion of the project as part of the state’s 2015-17 biennial budget.