The floors in much of the new tower are concrete. A final step in finishing the concrete floors is polishing—a job that is messy but produces a great result. In preparation for polishing, the floors are cleared of debris, construction equipment, and any stored items. Then a worker runs a polishing machine over the floor. The machine dispenses a slurry containing grit and its rotating polishers rub the grit against the concrete surface. In another pass, the slurry is washed off the floor and then a final buffing produces a shiny surface.

Outside the building, workers continue to install decorative panels on the facades. They also are completing the entrances on the east and west ends of the tower. Work continues on ceilings above the east and west porticos and installation of decorative terra cotta panels to the south and west elevations. 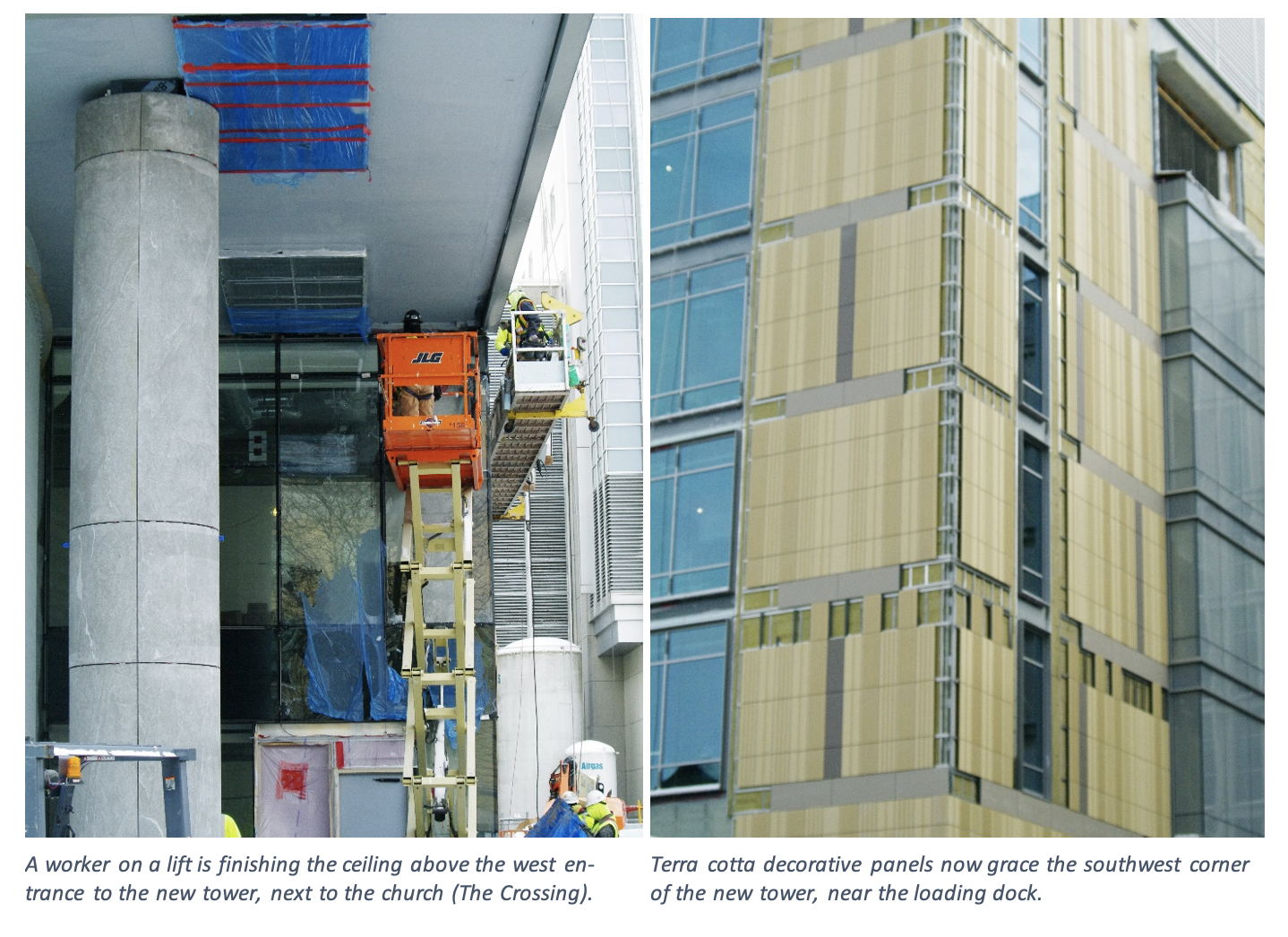 Because the contractors misunderstood the work to be done, the fire-rated partitions at the Mathews / Daniels elevator lobby were not constructed properly. Last week the contractors returned to these areas to complete their work. As before, construction teams are working on more than one floor at a time. To cross between the Mathews and Daniels wings, you might need to go up or down one or two floors to get through. These circumstances may disrupt the sequence of ‘up’ and ‘down’ stairwells. If you need to use a stairwell in the ‘wrong’ direction, step aside on a landing if you encounter another individual moving in the opposite direction.

Construction of the fire-rated partition at the Mathews-Daniels building interface on the 7th floor is not yet complete and will resume in early February, with completion in early March.

The new tower will be connected to the existing Daniels wing at the fourth and fifth floors, as well as from the second floor down to the sub-basement. In January construction began to reconfigure the corridors at the north end of the Daniels building and accommodate doorways to the new building.

4th-floor work involves the reconfiguration of rooms 4343 and 4351 to connect the research floor of the tower with Daniels.

5th-floor work involves the demolition of rooms 5341 and 5351. The fifth floor of the tower is level with the fifth floor of Daniels, and this work will open the doorway that connects them.

6th-floor work is scheduled to begin on Monday, February 15. It involves blocking the windows in rooms 6341 and 6351.  All construction work will be internal to these two rooms.

7th-floor work is tentatively scheduled to begin on Monday, March 1. This work involves blocking the windows in rooms 7341 and 7351.  All construction work will be internal to these two rooms.

Construction activities will not affect access to labs, offices, or the stairwell.  Dust and debris will be contained behind construction barriers.  There will be occasional noise and vibration. The work is expected to be complete in early March.

Shutdowns of Daniels and Mathews Wings

Here is the current, but still tentative, schedule for the planned shutdowns:

Heating, ventilation, and fume hood exhaust will be affected. There will be fluctuations in ambient room temperature. We do not expect electric power, process cooling loop, water, sewer, house nitrogen, or natural gas supply to be affected, but the construction activities are complex and extensive, so it is not possible to anticipate all eventualities. Instruments and equipment should be left in a condition that does not require monitoring during the period of the shutdown.

The schedule is not yet final, so we will provide further details as planning develops. There will be one-month’s advance notice of confirmed dates.

We thank Nate Danor of Miron Construction and Jim Maynard for images in this newsletter issue.