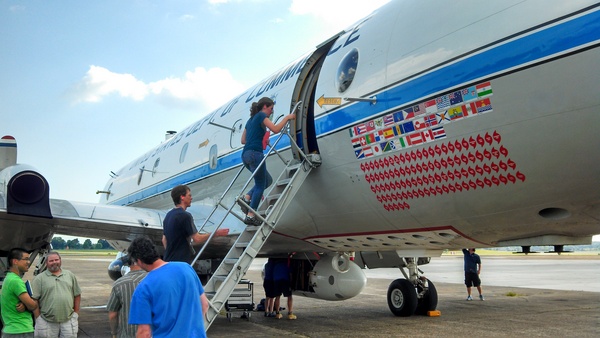 As UW-Madison graduate student Jen Kaiser settles into life in Smyrna, Tenn., this summer, her days develop a rhythm. She wakes up early, checks the weather forecast, and heads to Sewart Air Force Base.

There, she waits on the ground alongside researchers from dozens of collaborating institutions as a research plane takes off for a 6-hour flight over the neighboring states. Aboard the plane is her charge — a scientific instrument that samples chemicals in the air over the southeastern U.S.

“During the day I’m almost like a babysitter [for our research instrument],” says Kaiser. “When the plane’s flying is less stressful than when it lands.”

Once the aircraft returns, Kaiser’s work really begins. She retrieves data from the on-board instrument with the touch of a button, then retreats to a makeshift office space to analyze the day’s haul. She typically spends an hour working with the data on her computer and informally discussing data highlights with nearby collaborators. By 7 p.m., she leaves the base until the cycle begins again the next day.

Until July 15, Kaiser is on site as part of the Southeast Atmosphere Study (SAS), a broad multi-agency push to understand unusual climate changes noted in the southeastern U.S., including a relative cooling trend over past decades in an otherwise warming country. With UW-Madison Department of Chemistry Professor Frank Keutsch, Kaiser is exploring the chemistry of the atmosphere to investigate links between aerosols and other airborne compounds and climate change.

“For this campaign, the big science goal is to understand how emissions translate to air pollution and how air pollution then links to climate change,” Kaiser says.

A major emphasis of Keutsch’s group is designing new research equipment and getting out of the lab to apply these tools in the field. For them, collaborative field campaigns such as SAS allow them to pool their resources with scientists from other institutions to tackle big questions about the atmosphere, such as distinguishing natural and human-derived aerosols and studying how they interact to affect local climate and air quality.

These large campaigns increase both the potential scientific impact and the level of complexity. SAS, running June 1 to July 15, serves as an umbrella for five large research projects studying various aspects of the links between emissions, air pollution, climate and human health.

The National Science Foundation (NSF) is interested in the fundamental science of the campaign, while the National Oceanic and Atmospheric Administration (NOAA) wants to understand the interaction between air pollution and climate. The Environmental Protection Agency (EPA) is focusing on factors controlling concentrations of aerosols, particulate matter and ozone, which impact people’s health and the climate.

“EPA is funding a NASA instrument operated by a graduate student to fly on a NOAA plane,” Keutsch says. “Everyone’s looking at the same overarching problems, just from slightly different perspectives.”

The Keutsch group is measuring two compounds in the air, formaldehyde and glyoxal, for two SAS sub-projects: Southern Oxidant and Aerosol Study (SOAS) and Southeast Nexus (SENEX). For SOAS, UW-Madison graduate students Kate Skog and Matthew Dorris have supervised two research instruments at an Alabama ground site. For SENEX, Kaiser manages a version of the group’s formaldehyde instrument that was adapted in collaboration with NASA researchers Tom Hanisco and Glenn Wolfe.

Traveling to Smyrna offered Kaiser the opportunity to immerse herself in the scientific enterprise, working with a NASA-engineered version of her group’s homemade instrument and rubbing shoulders with well-known researchers. “I’ve read their papers, so it will be like meeting celebrities,” she says.

And each time she boards the research plane and pushes the button to download the day’s measurements, she is one step closer to revealing the current state of the atmosphere in the region and informing policies around climate change — perhaps for decades to come.