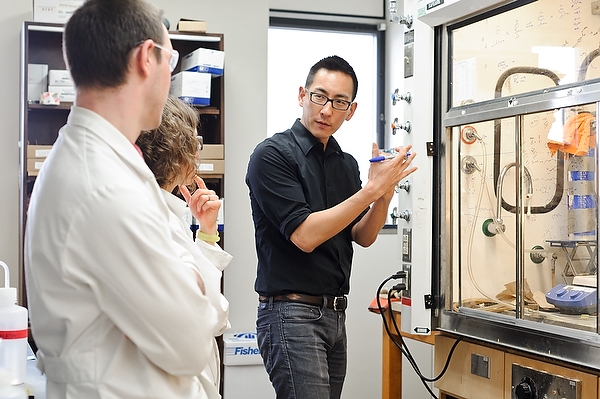 Tehshik Yoon, associate professor of chemistry at UW-Madison, is one of the professors at the forefront when it comes to thinking about and testing out new technologies while teaching. His students and colleagues say his efforts have not gone unnoticed.

Because the current crop of dedicated online learning platforms can be a bit clunky, Yoon says he tries to bring into the classroom the tools students are already using outside of the classroom: Facebook, Twitter, blogs, and other social platforms.

In 2006, as social media and social platforms were coming into their own, each student in his Advanced Organic Chemistry 346 class wrote 12 blog posts demonstrating his or her conceptual understanding of the experiments conducted during labs. He envisioned this approach helping future scientists better communicate their work to non-scientists.

Between classes and his group’s catalysis research, Yoon took a moment to reflect on how he has incorporated social media into his classes. An edited transcript of the conversation follows.

Q: What were your initial goals in having your students blog?

TY: It was both to build a community in the class and to evaluate the students’ comprehension. Over the course of the semester, they wrote 12 blog posts, which were graded for participation. I used the posts as was a way to identify the students who had problems with writing so I could intervene before their lab reports were due. I didn’t really use the posts as an evaluation tool in terms of their understanding of science, per se.

Q: So each student wrote a blog post prior to submitting a lab report?

TY: Yes, the idea was that they would write a post after each experiment, and they would write about the experiment. I liked this approach for a lot of reasons. It reinforced what they had just done so they didn’t forget about it until they wrote the lab report. They had to write about it in terms that their grandmas would understand, so they had to understand exactly what they did at a really deep level, which is important for that kind of a class. And then, when they were all reading one another’s posts, it was also a metacognitive exercise to see if someone else noticed something about the experiment that they didn’t. The idea was to try to build a loose community and get the students more engaged with their work, rather than giving them the assignment only to have them run through the recipe and forget about it later.

Q: You’ve also experimented with online office hours. How did you come up with that idea?

TY: That idea grew out of using instant messaging (IM), and it was largely desperation more than anything else. During office hours, I ended up getting lots of drop-in students who would show up and not know what to say. They would say “I’m not doing very well. Can you tell me how to do better?” So I was inspired by the fact that about six or seven years ago, everyone was on IM. Instead of doing regular office hours, I held online office hours. I was online almost every evening because that’s when I do most of my writing. So I was already at the computer, and if someone had a question, they could IM me and ask the question really quickly. The idea was that students were going to have the best and most interesting questions when they were actually studying and engaged with the material – and that was in the evenings and on the weekends. And that’s also when I happen to be at the computer myself.

Q: How did the students respond to that approach?

TY: It worked really well. I used it for about two years, and then IM died. So when I was looking for something else to use, I realized that everyone uses Facebook. I transitioned the idea over to Facebook and created a Facebook page for my class. That’s actually been the most successful experiment so far. You can use the platform to show actual diagrams – you’re not limited to text as we were with IM. The really cool thing is that every once in a while, someone will ask a question and then other students will answer. That’s amazing. It helps me because it reduces my workload. It also makes it so that instead of getting 20 questions about something I didn’t explain very clearly, someone will post it there and a bunch of people will pile on to the same comment. Then I can go in and clarify, rather than dealing with 20 individual emails that say exactly the same thing.

Q: What’s the benefit to the student?

TY: I really love that when they help one another, it has the same metacognitive effect, and they’re all engaged in one another’s educations. The really good students are helping out the weaker students, and the platform helps them create study groups. The goal of creating a learning community in the classroom is really benefited by the fact that Facebook is really good at creating communities.

Q: How do you see these social media tools continuing to change?

TY: So far I’ve been adapting and responding to the tools presented to me by the students. It’s a little bit hard to predict, because these things change so quickly.