The Widicus Weaver Group uses rotational spectroscopy, a data collection system many astrochemists use. However, Yocum’s project had a slightly different focus within the field of astrochemistry. 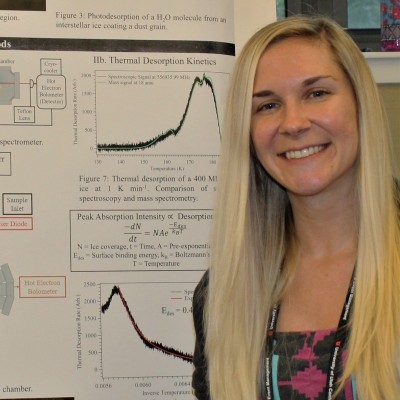 According to Yocum, the ‘ices’ are not just made of water in interstellar clouds – other chemicals include carbon dioxide, carbon monoxide and methane. On Earth, we typically imagine these chemicals in gas form, but due to the extreme cold temperatures in the interstellar clouds, they can be in the solid phase.

“These ices provide a ‘fast’ formation pathway for more complex chemistry to happen,” Yocum said. “That’s why we find them so fascinating. We believe ices are the starting point of a lot of the different molecules that we detect in space.”

Yocum became interested in the field of astrochemistry after an internship studying cosmic ice chemistry at NASA during her undergraduate degree at Kutztown University of Pennsylvania.

“[The internship] answered a lot of the questions that I sit and think about day-to-day, such as ‘how did life start on Earth?’ and the different theories of how this looks scientifically,” Yocum said.

After defending her thesis, she began her position as a NASA Postdoctoral Program  (NPP) Fellow. She secured funding for two years to continue the ice chemistry work she studied with the Widicus Weaver Group.

“My graduate focused on developing the technique and looking at its limitations and capabilities,” Yocum said. “Now we have a decent idea of what those limitations are, so we are focusing on the chemical studies rather than instrument development.”

Specifically, Yocum’s proposal covers two main areas. First, Yocum plans to examine prebiotic molecules such as glycine, a simple amino acid, and how these molecules physically transfer to the gas phase in interstellar clouds. Astrochemists continue to look for amino acids in interstellar space because that would tell researchers that prebiotic molecules are able to form at very early stages in star formation before planets develop. However, even after decades of research, astronomers have not confidently detected glycine, despite models showing that it can be formed in the interstellar medium. The second part of her proposal will study the detection limits of a new submillimeter spectroscopic technique to determine if it could be used to detect prebiotic molecules while on a flight mission spacecraft.

“When [our research group] came to UW, it was really exciting because it seemed like everyone was interested in astrochemistry,” Yocum said. “That was nice because I felt encouraged by my committee and I felt that they were truly interested in my research.”

To learn more about the Widicus Weaver group, read about their work here.