We have started to move! On Monday, July 26 movers from C. Coakley transferred all of the equipment, instruments, and glassware that support analytical chemistry instruction from their temporary quarters Medical Sciences Center to temporary storage on the fourth floor of the new tower and also moved about half the equipment and glassware of the general chemistry program over to the MSC. Moving general chemistry to the MSC allows us to provide in-person laboratory experience for students in Chemistry 103 from the first day of classes this fall, provided there is time to unpack and set up everything needed for that course.

Starting shortly after 8:00 am, workers from C. Coakley loaded and moved three truckloads of analytical equipment out of the MSC. By noon the labs and stockroom were essentially empty. The trucks were unloaded at the corner of Mills Street and University Avenue, where the analytical material could be moved directly to the tower freight elevator and up to the fourth floor. Then each truck moved to the chemistry loading dock to be loaded with general chemistry equipment that was going to the MSC. By noon the temporary laboratories that analytical has occupied for four years were empty. By 5:00 pm those labs had been refilled with gondolas full of general chemistry equipment. Great job Coakley! 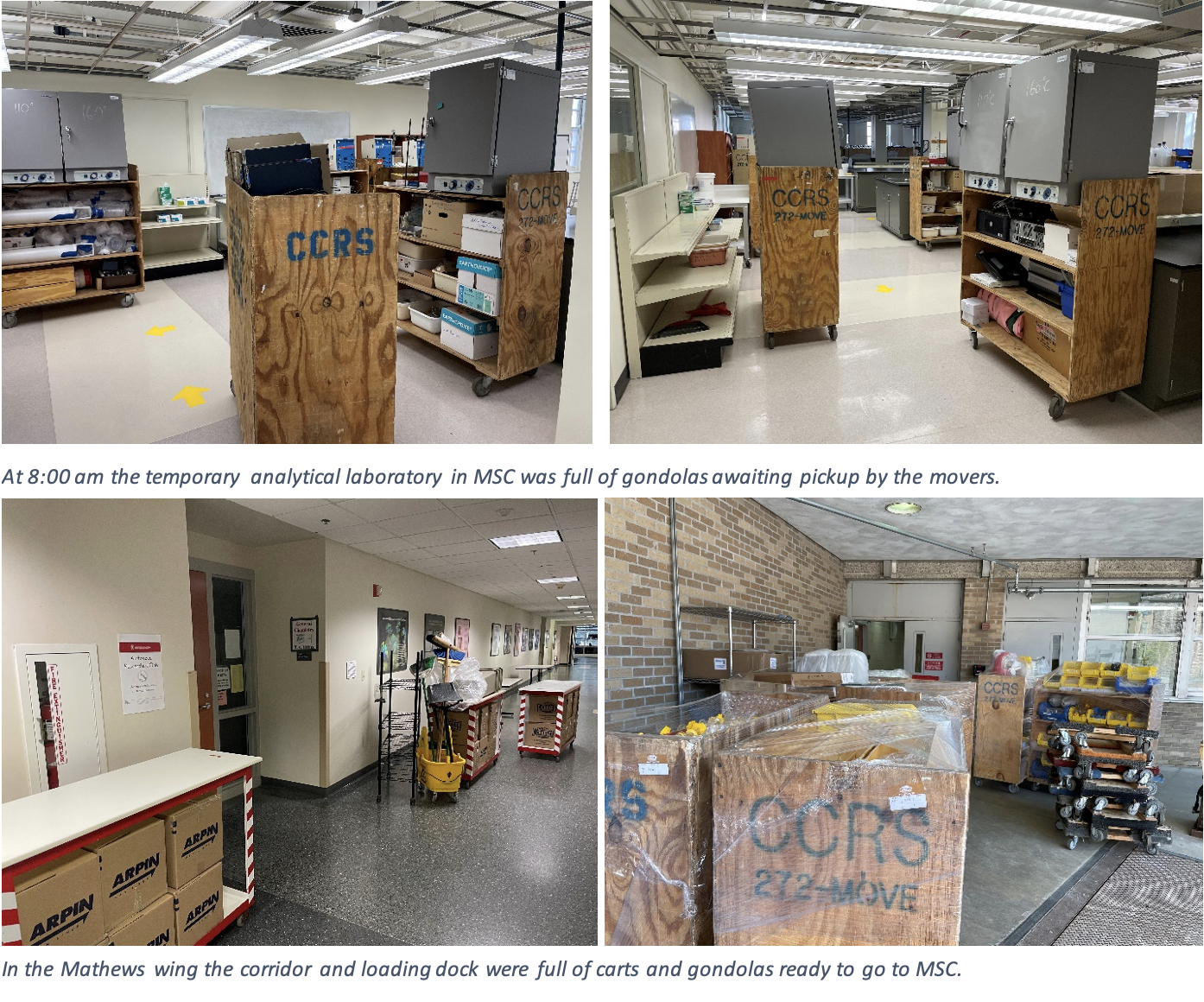 We still cannot move into laboratories in the new tower because of the elevator pressurization problem described in earlier newsletters and because the fume hoods in the tower have not yet been tested by the construction team and by UW-Madison Environmental Health and Safety staff. Thus the analytical move just described did not include any chemicals—just equipment and glassware—and was to temporary storage space on the unfinished fourth floor of the tower. Once the tower is complete and the UW-Madison is granted occupancy, analytical will be able to make a short move from the fourth to the eighth floor of the tower and then begin to unpack and set up for fall classes.

Main Move Yet to Come

The main move, which involves the other half of general chemistry moving to temporary quarters on the seventh floor, all the organic chemistry laboratories moving to the fifth and sixth floors of the tower, and moves to new offices, is now scheduled for the week of 30 August through 3 September. But that move remains contingent on successful testing of the elevator pressurization system; we expect that testing to be complete the week of 23 August.

Aside from the major issues of elevator pressurization and fume-hood testing, the new tower is looking really good. The sidewalk along University Avenue has been open for several weeks. Along the northeast, north, west, and southwest sides of the building and adjacent to The Crossing (the church at the corner of Charter and University) the landscaping plan has been implemented and new plants are growing. Bike racks have been installed and the bike path along University Avenue has been restored. Windows have been washed and the exterior of the building adds a lot to the ambiance of University Avenue.

Our efforts to distribute a large quantity of surplus equipment and glassware to other state-supported schools, colleges, and universities that can make use of it has been quite successful. To date, more than a dozen carloads or vanloads of equipment have been carried to such institutions by enterprising chemistry teachers. Now that we are in the process of moving, pickups of surplus equipment have been suspended, but after we have moved into the new tower—from early October until the end of the year, we hope—surplus equipment and glassware will again be available. If you know of anyone who could use glassware and equipment mostly intended for general chemistry-level students, ask that person to contact John Moore. There will be plenty of time this fall for those who might use it to come and get it.

This information is up to date as of Tuesday morning. Email bulletins will be provided as needed.