In preparation for the 16-day shutdown of Daniels that begins next Monday (March 15), a lot of work on infrastructure must be completed in mechanical areas on the ninth- and tenth-floors of the new tower. During the shutdown, construction workers will turn off and remove two doddery air handlers on the ninth floor of Daniels and connect the Daniels air supply to new air handlers on the ninth floor of the tower. This week the ninth and tenth floors of the tower are a beehive of activity in preparation for that changeover. After the changeover, the Daniels wing will have a new, much more reliable supply of air to offices, labs, and other spaces. 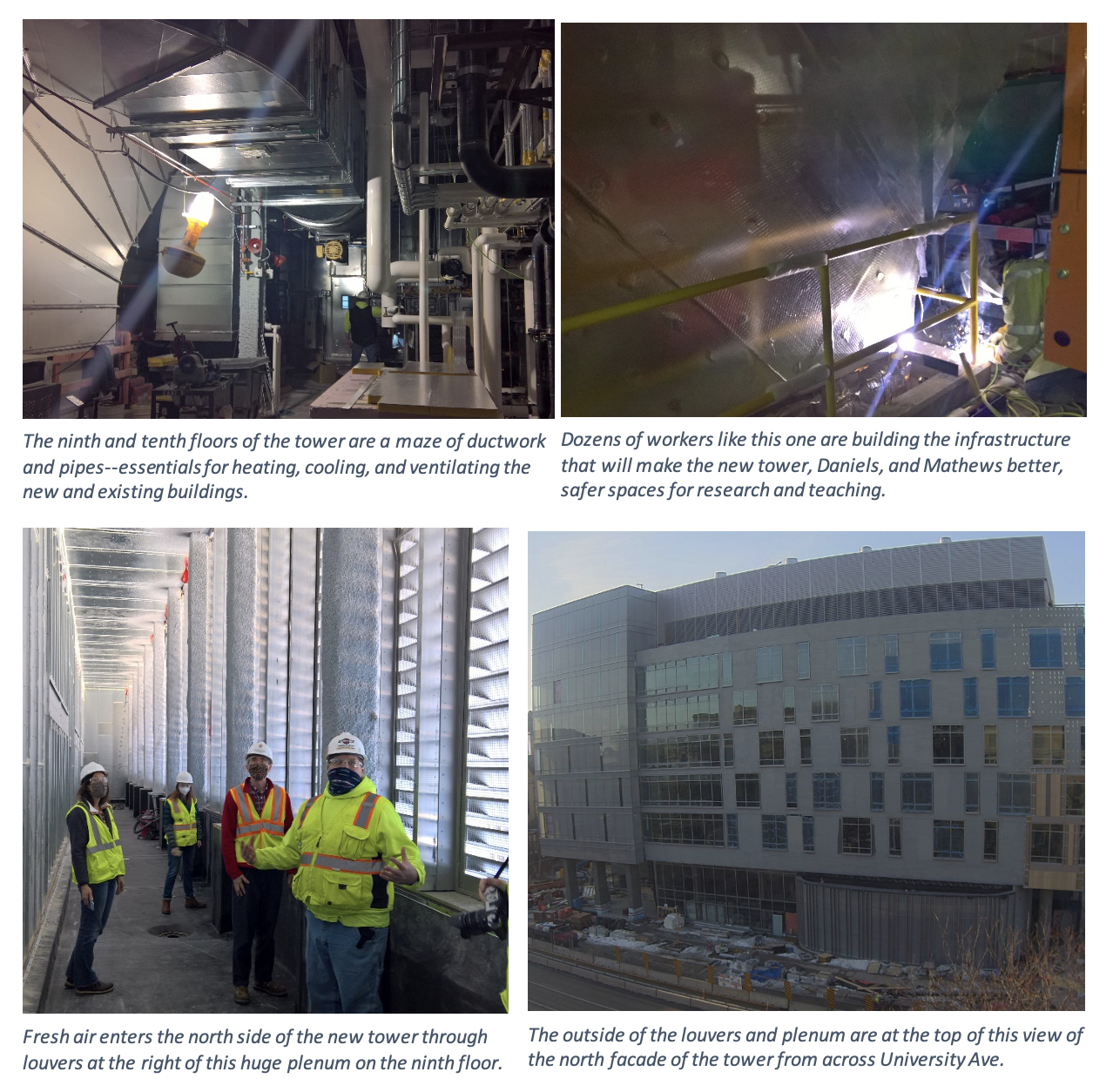 March 15-30       Daniels (including Seminar Hall) is closed to all occupants to enable switchover to new the new supply-air system. Occupants of Daniels labs were sent detailed instructions for preparing labs in an email on March 2.

The newly installed fire doors in the Mathews / Daniels elevator lobby will be closed. Building-complex occupants should not enter the Daniels wing between March 15 and March 30 because Daniels will be a construction zone. This supersedes any approvals regarding building access that you may request or receive via entry.chem.wisc.edu.

Heating, ventilation, and fume hood exhaust will be affected. There will be fluctuations in ambient room temperature. We do not expect electric power, process cooling loop, water, sewer, house nitrogen, or natural gas supply to be affected, but the construction activities are complex and extensive, so it is not possible to anticipate all eventualities. Instruments and equipment should be left in a condition that does not require monitoring during the period of the shutdown.

Occupants of the Daniels wing will need to prepare their labs and offices for the shutdown in a manner similar to what was done during the shutdowns for fire sprinkler installation. On March 2, Daniels occupants were sent a list outlining how to prepare for the shutdown.

During the first three weeks of April, immediately following the Daniels 16-day shutdown, construction workers will be removing concrete pads on which the old air handlers were located. The pads will be cut with a saw and parts of them will be jack-hammered away. There will be much noise and vibration at the north end of Daniels.

Beginning March 15, a crane will be positioned at the Johnson-Street (south) side of the Daniels wing to do overhead work at the roof level.  The crane work requires these changes to pedestrian and vehicular activity in the area.

Building occupants should enter / exit at the first floor via Shain Tower or via the WEST Mathews door. Do not use doors at basement Daniels (emergency use only).

The new tower will be connected to the existing Daniels wing at the fourth and fifth floors, as well as from the second floor down to the sub-basement. In January construction began to reconfigure the corridors at the north end of the Daniels building and accommodate doorways to the new building.

Floor 4 work involves the reconfiguration of rooms 4343 and 4351 to connect the research floor of the tower with Daniels.

Floors 6, 7, and 8 construction is underway. It involves blocking the windows in rooms on the north wall of Daniels. All construction work will be internal to those rooms.

Construction activities will not affect access to labs, offices, or the stairwell.  Dust and debris will be contained behind construction barriers.  There will be occasional noise and vibration. The work is expected to be complete soon.

Two cranes and a lift occupy the closed part of Mills St. between Johnson St. and University Ave.
In a basket suspended by one of the cranes, workers apply decorative cladding to a new exhaust duct on Daniels’ roof.

Because a crane is raising and lowering materials to and from the rooftop of the Daniels wing, North Mills Street has been closed between West Johnson Street and University Avenue through Thursday, April 1. All access to Conklin Place (the alley in the middle of the block on the east side of Mills Street) will need to occur from north Brooks Street on the east. 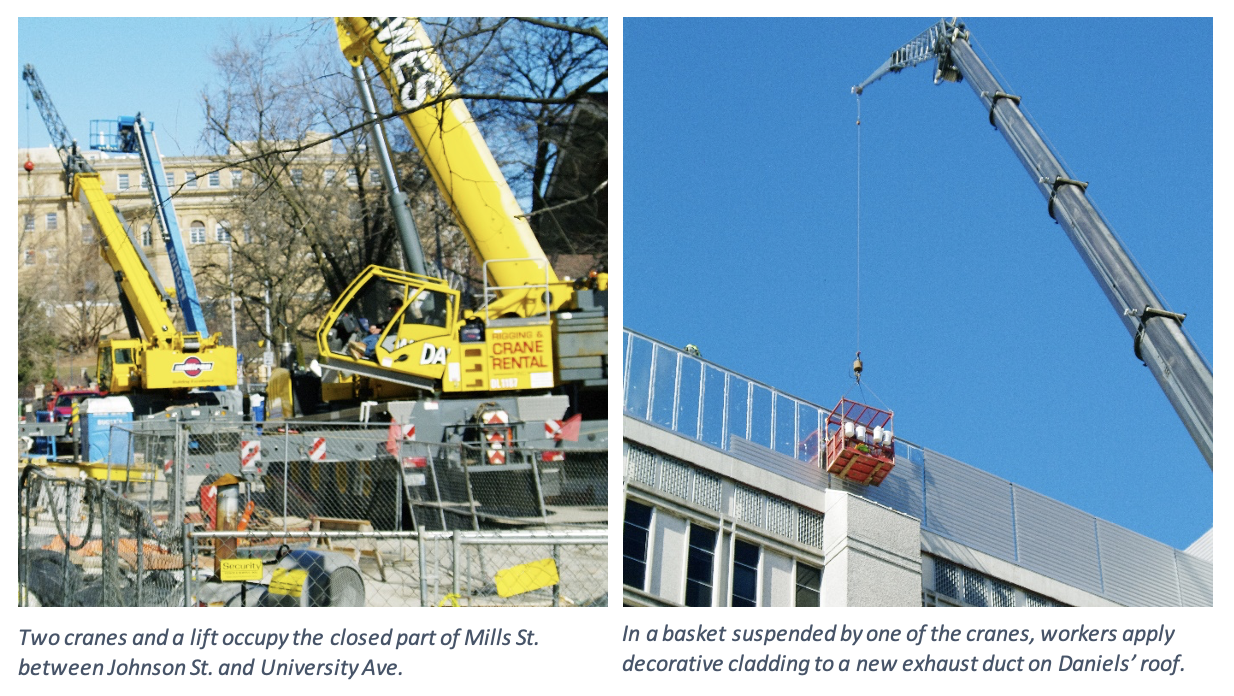 The next phase of the building-wide WiFi upgrade began Feb 10.  Contractors are installing devices throughout the building complex. Work in Shain tower is nearly complete and work in Mathews and Daniels is underway. Installation of each device requires only a few minutes. There may be a momentary disruption of local WiFi service in the work area.  Work will proceed during the next several weeks.

The schedule for Mathews is not yet final, so we will provide further details as planning develops. There will be four weeks advance notice of confirmed dates. 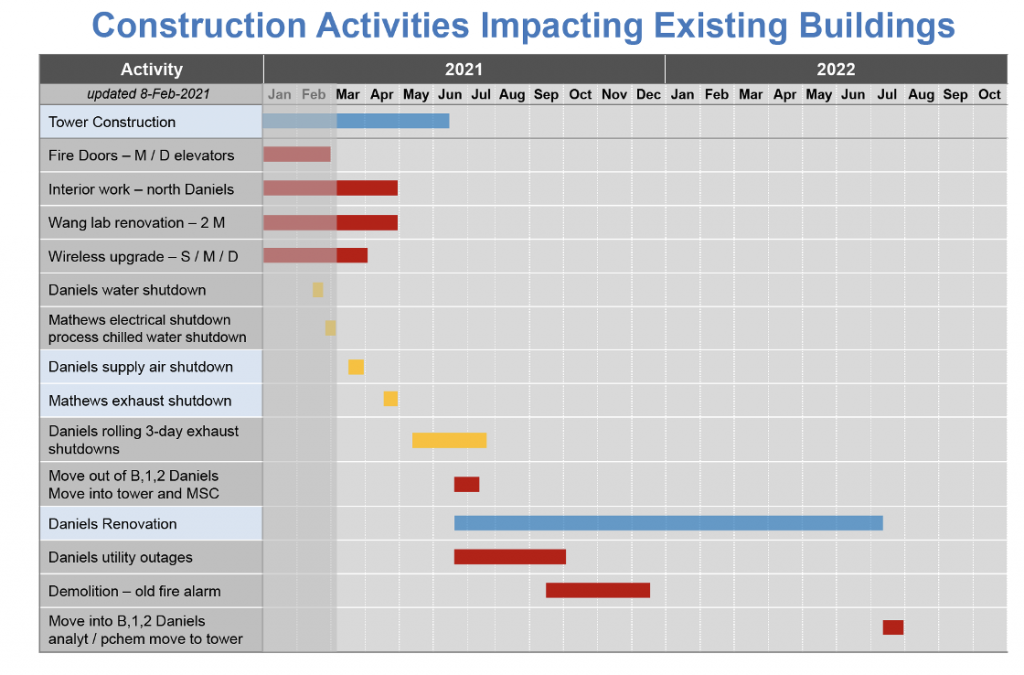 We thank Miron Construction and Jim Maynard for the photos used in this newsletter issue.