Daniels. Last week’s newsletter mentioned the partial closure of Johnson Street to enable fabrication of new ventilation ductwork to be installed on the rooftop of Daniels. This past week a crane lifted sections of the ductwork to the top of Daniels, where it is easily seen from ground level. The new ductwork adds a new component above the Daniels ninth floor. 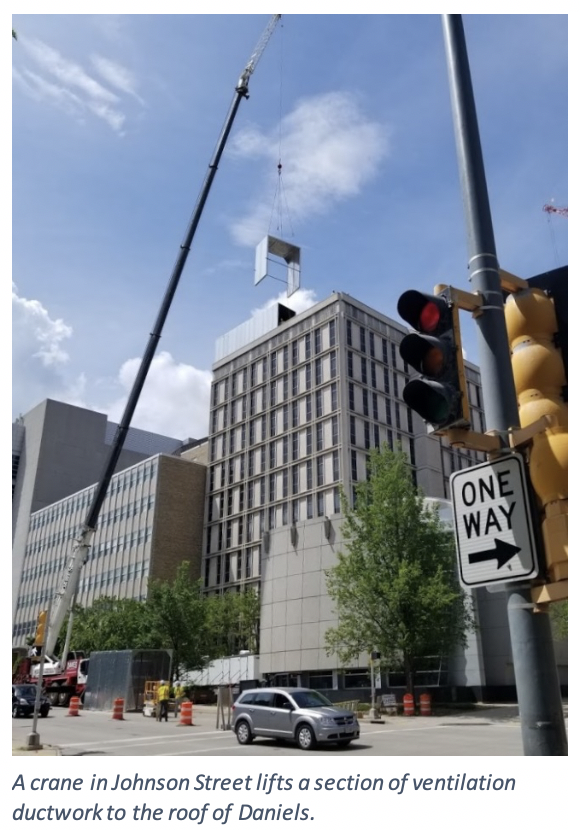 New Tower. Workers are busy on all floors adding ventilation ducts, electrical conduits, piping for labs, and studs that outline where walls eventually will be constructed. In sub-basement lecture rooms and interaction areas, the last of the concrete has been poured. Some minor concrete work will still need to be done in the sub-basement in the area that will become the new chemistry demonstration lab, because the base of the tower crane is in that space. Final work will be done after the tower crane has been dismantled.

The 360-seat lecture room is taking shape. Concrete floors have been poured for all tiers of seating. Metal studs are in place for walls on the south side (left). The right side of this lecture room extends under the sidewalk along University Ave.

Equipment continues to be delivered to the top of the new tower and workers are constructing a concrete-block parapet around the perimeter of the ninth-floor roof. Exterior walls and windows are being added on all the floors below.

Mock-up. The mock-up versions of the decorative parts of the new tower’s exterior have now been delivered and installed at the mock-up site in parking lot 45, across Mills Street from the Charter Street Power Plant. The walls and windows are now ready for testing to make sure they are watertight. If you imagine a much greater expanse than this mock-up, you can get a good idea of what the outside of the new tower will look like when work is complete in less than 11 months. On the view of the mock-up shown below, the left side shows what the east end of the new tower will look like from across University Avenue. The right side of the photograph shows what the western three quarters of the building will look like. (This latter is the side closest to Charter Street and “The Crossing”.) The mock-up facings look very much like the architectural drawings we first saw several years ago. That’s good! 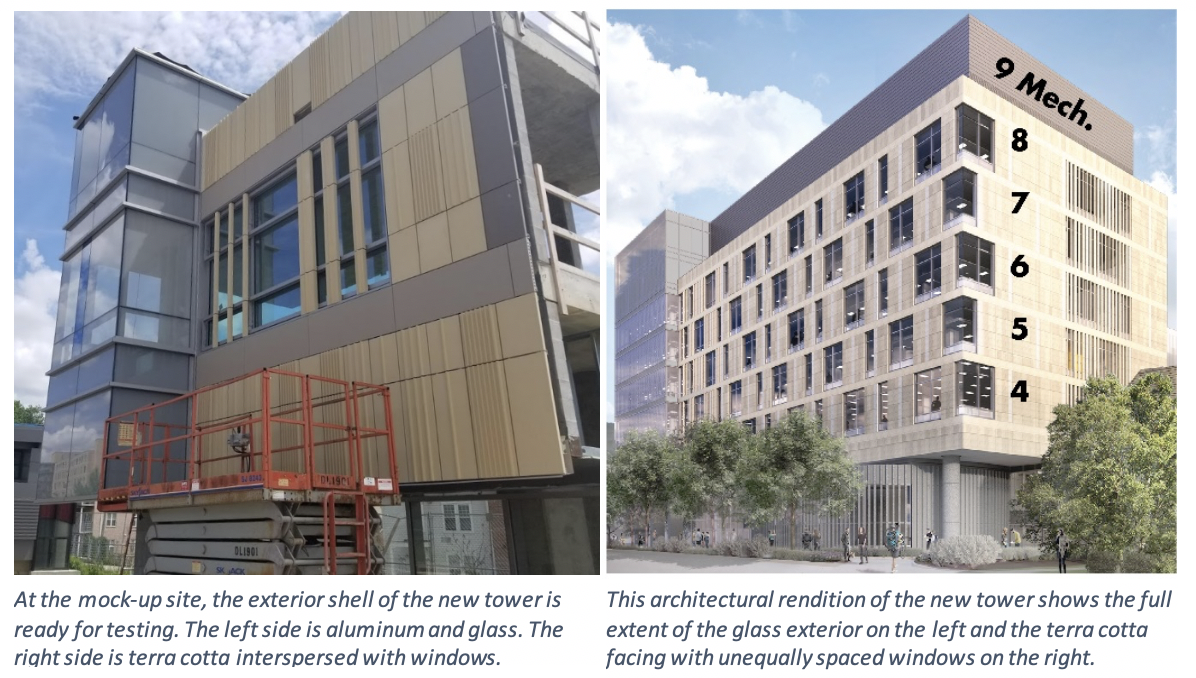 Fire Protection. Installation of fire sprinklers on the sixth floor of Mathews began last week and continues for the next two weeks.

We are indebted to Gerald David of Miron Construction for a photograph in this report.