Construction workers install the second of two main trusses that will support the building above the larger lecture room and learning studio. [Photo by Prof. John Moore]

We have come a long way since groundbreaking in September 2018, but there is more to do before construction and renovation are completed in 2022. A great team of architects and engineers, construction companies, university and system administrators, and state government workers are helping us build state-of-the-art laboratories, lecture rooms, active-learning classrooms, meeting spaces, and offices. When complete this project will directly affect more than 14,000 student enrollments per year.

To date there have been three major achievements: abatement and demolition; site excavation; and beginning to build the new chemistry tower.

In the fall of 2018 abatement experts removed asbestos and mercury waste from the section of the Daniels wing that had housed lecture halls, the library, and three classrooms. Then a wall was built to separate the remainder of Daniels from the construction zone and demolition began. Demolition was a slow, careful process because classes were being held a few feet beyond the separation wall. It was poignant to see the old facility eaten away by heavy machinery, but exciting to think about what will rise in its place. 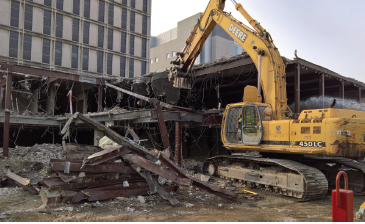 In December, the jaws on this and two other demolition machines tore away steel and concrete from the north side of Daniels. [Photo by John Moore]

After debris from demolition was hauled away, excavation began for the foundation of the new tower. The excavation was wide and deep because two big new lecture rooms in the subbasement level will extend under the sidewalk along University Avenue.

Then our building began to grow out of the excavation. During Memorial Day weekend a 265-foot tower crane was erected, with its base below the floor of what will become the new chemistry demonstration laboratory. Soon thereafter two huge trusses were installed to support a research floor, four teaching floors, and a mechanical penthouse above the 360-seat lecture room and new learning studio. At the time of this writing, concrete has been poured for the walls surrounding the sub-basement and basement of the new tower, as well as for the basement floor and part of the first floor.

The new building is not the only capital construction project that the chemistry facilities committee has been involved with this year. Other projects include upgrading utilities under Charter Street (which closed Charter Street during the winter), design of a new home for the Chemistry Learning Center, planning for expansion of some general chemistry laboratories into the Medical Sciences Center, major renovations of labs for two research groups, and remodeling of space for several new faculty colleagues. Bob McMahon and John Moore stand in the excavation area. A corner of Shain Tower is visible at the upper left. [Photo by Zach Bond, Miron Construction Co.]

It has been a busy year and next year may be even busier. Keep up with the new building and everything else about our department via regular visits to our website.

NEW FEATURES
When construction and renovation are complete, we will have these improvements: