Daniels Sub-basement. The new rooms in the Daniels sub-basement that will house a new emergency generator and other electrical equipment were finished some weeks ago. Last week workers were installing conduit ducts that will carry power from the Daniels sub-basement into the new tower. By the end of this month we expect to see the generator and transformers delivered to the east side of Daniels, lowered into an area well and then transported into the sub-basement. Lots more work will come after that to connect the electrical equipment to the new building. 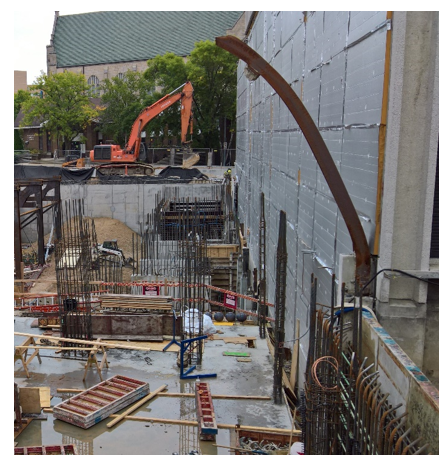 New Tower. Those who have been watching the construction site since demolition of the north end of Daniels may have wondered why the bent steel column at the northwest corner of the remaining part of Daniels was left standing. The answer seems to be, because it was not in the way and did not need to be removed. (It has remained in position all winter, spring, and summer.) With concrete forms and rebar coming up to the first-floor level, the bent column would soon have prevented further construction, so it was removed last Friday. When last seen it was lying on wood timbers in Charter Street. 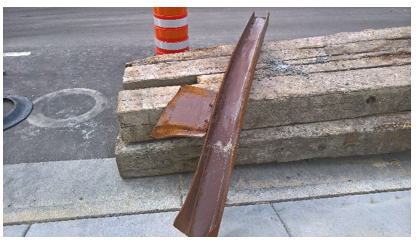 Mock-up. The mock-up in parking lot 45 gained some additional features last week. Steel beams and supports were installed for a prototype of the ninth-floor mechanical rooms that ultimately will provide ventilation for both the new tower and existing buildings. Also, a steel framework was installed to support exterior wall components. As we have mentioned in earlier newsletters, the mock-up provides a way to test construction methods and make certain that we get the best possible quality in our new building.

Loading Dock. We now have temporary blacktop on the loading-dock driveway. In preparation for paving, driveway excavation work began Wednesday, and the work continued on Thursday. By Friday afternoon asphalt paving had been installed and the driveway was closed for the weekend.

There are no planned closures of the loading-dock this week. However, there may be brief closures at unpredictable times.