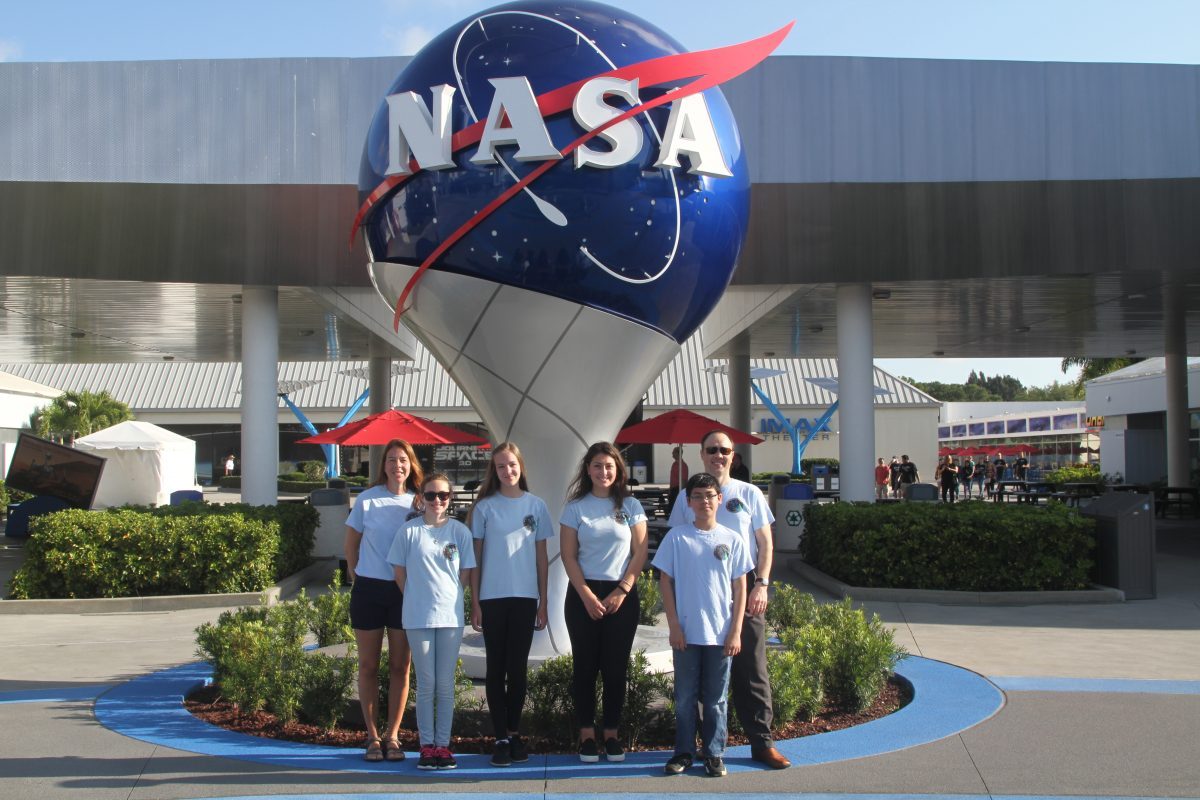 May 21, 2019, Madison, WI — At the end of April, the winners of the 2018 Wisconsin Crystal Growing Competition (WICGC) had the opportunity to visit the Kennedy Space Center and ISS US National Lab in Cape Canaveral, Florida to take part in the 2018-19 Wisconsin Space Crystal Mission. A team of several high school and middle school students designed experiments comparing the quality of Earth-grown crystals to crystals grown in microgravity conditions aboard the International Space Station. During their time in Florida, students were able to prepare and present their experiments, and upon arrival home, they were able to watch the launch of their crystals into space. The team members of the Wisconsin Space Crystal Mission included Kaitlyn Twesme, Joana Pashaj, Kristin Kiley, Joseph Quinn, and Payton Kelly-VanDomelen, and they were accompanied by their families, project leader Dr. Ilia Guzei, project scientist Dr. Galina Bikzhanova, and project coordinator Stephanie Twesme. Payton Kelly-VanDomelen, a middle school student from Sun Prairie, WI, is part of the WICGC Student Media Team, and was able to document her experience in Florida.

My family drove from Wisconsin to Florida, which took two full days of driving. We left early in the morning on April 24th, stayed in Alabama overnight, and arrived in Florida on the evening of the 25th. All of the other teammates flew in to Florida and arrived on or before the 25th. Most of us also stayed until May 1-2.

On April 26th, we spent the day at the ISS US National Laboratory Space Life Sciences Lab to prepare our experiments for launch to the ISS. We made our crystal growing solutions by dissolving solute into deionized water and filtering out any impurities. After the solutions were filtered, they were injected into the crystallization vessels. A sharp object check was performed to ensure that any sharp edges on the experiment vessels would not perforate the outer layer of containment. All of the experiments were labeled so that the astronauts would know which bag was which. To label the bags, we used Kapton tape, which we each got to put one of our fingerprints on. The experiments were then sealed in large Bitran bags, and Dr. Ilia Guzei, Dr. Galina Bikzhanova, and April Spinale (ISS US National Lab Payload Specialist) handed them off to NASA for the launch.

On April 30th, Kaitlyn, Joana and I gave a presentation about our involvement in the Wisconsin Space Crystal Mission in the Journey to Mars Theatre at the Kennedy Space Center. After the presentation, Joana and Joseph were part of a poster session, which took place underneath the Atlantis Space Shuttle. When the poster session was over, we got to explore the Kennedy Space Center for the remainder of the day.

The launch of the SpaceX CRS-17 Falcon 9 rocket was originally scheduled for February 2019. However, the launch date slipped about eight times, eventually scheduled to launch on April 30th. The rocket launched on May 4th at 2:48 A.M. EDT. Sadly, many of us hadn’t made plans to stay in Florida that long, and could not be there to see the launch in person. However, several of us got up to watch the NASA TV livestream of the launch. The Dragon Capsule carrying our experiments was grappled by the Canadarm2 at 7:01 A.M. EDT on May 6th.

There were two types of experiments run by the middle school team and the high school team. The middle school team developed experiments using the Evaporation Technique to grow crystals of potassium dihydrogen phosphate, while the high school team’s experiments focused on using the Thermal Gradient Technique and aluminum sulfate as their crystallization compound. The middle school experiments consisted of two jars, one containing the solution and the other containing a desiccant. Once aboard the Space Station, the jars will be connected using a jar connector with a semipermeable membrane in the middle. The solution will then evaporate through the membrane and into the desiccant, forming crystals. In the high school experiment, the hardware includes a small bag, similar to IV bags used in hospitals, with two ports. A syringe is connected to one of the ports. When the experiments are on the Space Station, they will be placed in a 4-degree Celsius refrigerator, which will cause crystals to form. The astronaut will then extract the remaining solution into the syringe to prevent the crystals from dissolving on their return to Earth.

The Wisconsin Space Crystal Mission art team created a free downloadable STEAM activity book that includes several different types of activity pages as well as two original graphic novels. The book is geared toward elementary, middle, and high school students. A few of the activity pages included in the book are word searches, coloring pages, crossword puzzles, mazes, spot-the-difference puzzles, and dot-to-dots. The graphic novels focus on the subjects of lab safety and crystallization in microgravity by different techniques. The art team also made and is managing a team Instagram account (@wi_space_crystal_mission) as well as a blog (www.wiscm.wordpress.com), where the activity book can be downloaded for free.

This was the second WISCM rocket launch for Kaitlyn and me, as we were part of last year’s mission as well. It was a very different experience from this year, with varying types of experiments, new team members, and even our time in the lab and at the Kennedy Space Center.

All of us had a wonderful time in Florida! We had lots of fun preparing the experiments and giving the presentation and poster session as well as visiting the Kennedy Space Center. Though most of us were not able to watch our experiments launch to space in person, we still had a great time!