Gross demolition began Wednesday, December 19 on the part of the Daniels wing that housed the library and lecture rooms. Demolition has proceeded smoothly, beginning with the portico (where the bike racks used to be), then the lobby area, and finally the lecture halls, library area, and north ends of labs on floors 1 and 2. This sequence of photos shows Daniels before and during the past two weeks of demolition.

Our loading dock driveway was opened to Charter Street on Friday, January 4, for deliveries only, but during the next week there may be times when it will again be closed and the temporary driveway will need to be used. During the next three weeks there will probably be one or two days when access to the loading dock will be cut off completely, as it was on January 3, but by the end of this week we expect the main access to be from Charter Street. 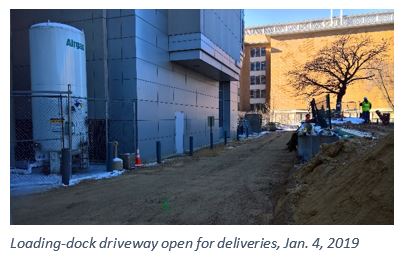 During the past few weeks the parking lot behind “The Crossing” was excavated so that steam, chilled water, sanitary sewer, and storm sewer utilities can be connected to the new tower. By the end of the week some concrete had been poured in the base of the excavation. In the left photo below you also can see the enclosed scaffolding for workers applying stone facing to the wall of “The Crossing” that was exposed when the old house was demolished. When this facing is complete the excavation for our new tower can begin; we expect this milestone to be reached in a week or so.

In the sub-basement, plumbing that serves all labs in the Daniels wing was rerouted to allow for proper drainage; this required a brief shutdown of labs throughout the Daniels wing. Also in the sub-basement, ductwork that supplies air and heat to floors SB, B, 1, and 2 in Daniels had to be rerouted to allow for eventual installation of new equipment. Both projects were completed more quickly and with fewer disturbances than expected.

Finally, spaces just south of the concrete-block wall separating Daniels B, 1, and 2 from the demolition/construction zone have been cleaned up and inspected in preparation for the spring semester. Specifically, room B341, half an organic lab, will be fully scheduled in spring and is ready to go.

This information is up-to-date as of Friday afternoon. Email bulletins will be provided as needed.
John Moore and Bob McMahon