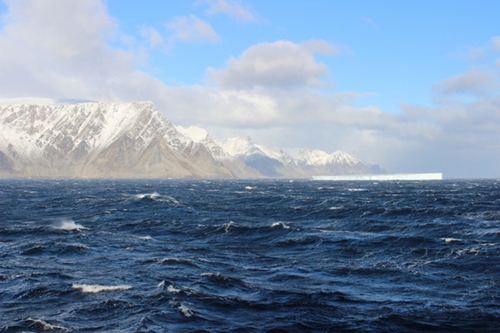 In a study published today in ACS Central Science, a research team led by University of Wisconsin-Madison Chemistry Professor Timothy Bertram peels back the mysteries of the structures of tiny aerosol particles at the surface of the ocean.

The work shows how the particles’ chemical composition influences their abilities to take in moisture from the air, which indicates whether the particle will help to form a cloud — a key to many basic problems in climate prediction.

Clouds are made of tiny droplets of water. It has long been known that the droplets that make up clouds form around tiny nuclei — grains of dust, salt or even microbial life.

Clouds help reflect solar energy back to space, but the process for a particle to seed a cloud can change depending on the natural setting. A particle must take up water from its surrounding environment in order to seed a cloud, but the particle’s chemical composition may be very uniform or very diverse, affecting its ability to do so.

Bertram’s group focuses on areas where chemistry significantly affects climate or the environment. And because oceans cover more than 70 percent of the Earth’s surface, the UW-Madison researcher has focused on the ocean surface in order to better understand an important piece of the larger climate picture.

“While the emission of particulates from the ocean isn’t nearly as strong as that from trucks, the majority of the Earth’s surface is not covered by trucks,” Bertram says. “The ocean may be a diffuse source (of these particles), but it’s a very important source.”

In their new work, Bertram and colleagues’ investigation began in a laboratory-based wave channel, which allowed them to replicate the types of sea spray aerosol particles found near ocean waves. They also studied particles from the actual ocean-air boundary. By mimicking ocean waves and sea spray in the wave channel, the researchers could gain insight into the structures and cloud-formation potential of particles in the open ocean.

The team then developed a new method that categorizes a diverse population of aerosol particles based on their likelihood of taking up water from the surrounding environment and forming a cloud. Previous approaches yielded one number to assess sea spray aerosol particles’ ability to form clouds. The new method, however, provides a more precise measure by indicating the percentages of particles in each category, thus more properly accounting for particle-to-particle variability in cloud formation.

“The advancement is that this is general,” Bertram says. “It’s a framework people can use broadly to look at this question of the diversity of particulates and how they impact cloud formation.”

The National Science Foundation supported the work through the Center for Aerosol Impacts on Climate and the Environment.