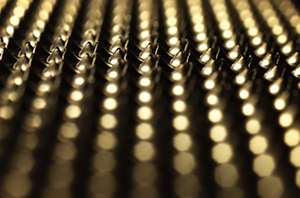 By figuring out how to precisely order the molecules that make up what scientists call organic glass — the materials at the heart of some electronic displays, light-emitting diodes and solar cells — a team of chemists from the University of Wisconsin-Madison has set the stage for more efficient and sturdier portable electronic devices and possibly a new generation of solar cells based on organic materials.

Writing this week (March 23, 2015) in the Proceedings of the National Academy of Sciences (PNAS), a team led by UW-Madison chemistry Professor Mark Ediger describes a method capable of routinely imposing order on organic glasses by enabling their production so that the molecules that make up the glasses are ideally positioned.

“Glasses are usually isotropic, meaning their properties are the same from any direction,” explains Ediger, a world expert on glass, who conducted the study with UW-Madison researchers Shakeel Dalal and Diane Walters.

Glass, says Ediger, can be made from any number of materials. The most familiar, of course, is window glass, made primarily of the mineral silica. But other types of glass can be made of metal and other materials, and nature makes its own variants such as the volcanic glass obsidian. Organic glasses are made using materials based on carbon instead of silica.

The new organic glasses devised by Ediger’s team “have the molecules oriented in specific ways, standing up or lying down,” he explains. The orientation affects performance and can confer greater levels of efficiency and durability in the devices they are used in.

While there is precedent for making organic glasses like those described in the new PNAS report, Ediger’s team, working with Juan de Pablo and Ivan Lyubimov of the University of Chicago’s Institute for Molecular Engineering, delved deep into the process and discovered the key for controlling molecular orientation during manufacture. The process can be exploited to easily and routinely make organic glasses whose molecules are better regimented, conferring enhanced properties of interest.

The discovery is important because organic glasses are widely used in what are called organic light-emitting diodes, the active elements of the displays used in some portable consumer electronics such as cellphones. Perhaps more significantly, the finding by Ediger’s team could help advance improved photovoltaic devices, such as solar cells, which convert light to electricity.
“We’re thinking about the next generation of photovoltaics,” says Ediger, noting that the use of organic glasses in things like solar cells has so far been limited. “That technology is commercially immature and improved control over material properties could have a big impact.”

In portable electronics, the work could help underpin new ways to build more durable screens. As many as 150 million such displays are manufactured for cellphones alone each year and the new discovery could result in displays that produce more light using as much as 30 percent less energy.

The finding by Ediger’s team could help advance improved photovoltaic devices, such as solar cells, which convert light to electricity.
The key identified by Ediger and his colleagues lies in a process called physical vapor deposition, which is how the organic light-emitting diodes that make up portable electronic displays are mass produced. The process for making the diodes occurs in a vacuum chamber where molecules are heated and evaporated, and then condense in ultrathin layers on a substrate to form the light-emitting display of a cellphone or other device.

“What is new in our work is that we have systematically explored the important control variable, the substrate temperature, and discovered a general pattern for molecular orientation that can be exploited,” says Ediger. “Furthermore, we now understand what controls the orientation trapped in particular glasses.”

The upshot, he says, could be organic light-emitting diodes substantially more energy efficient than those currently in use.

The study was supported by the U.S. Department of Energy and the National Science Foundation.