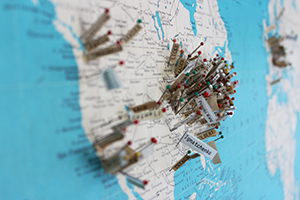 Within the Department of Chemistry at UW-Madison, the late Professor Emeritus Howard Zimmerman (1926-2012) was widely known for two things: his pioneering research in the field of organic photochemistry and his pride in the many successful chemistry alumni whose careers began in the Zimmerman (or “Z”) lab. A symbol of his reputation for the latter, Zimmerman maintained a world map depicting the locations of Zimmerman lab alumni. This was no small feat, considering the fact that there were dozens – if not hundreds – of tiny flags on the map, each one representing the location of a former student or lab member. 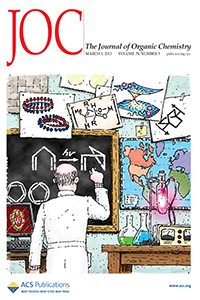 The March 1 issue of The Journal of Organic Chemistry is dedicated to Zimmerman and his 65 years of important contributions to the field. Former students, colleagues, and friends of Zimmerman contributed the 54 articles included in the issue. Several of the contributors are true contemporaries of Zimmerman: Jack Roberts, Andy Streitwieser, George Olah, and Ken Wiberg to name a few. As a whole, the articles demonstrate a remarkable amount of collaboration, as well as an impressive breadth of research.

“It wasn’t hard for us to marshal the forces, because Howard kept in touch with his former students and co-workers almost religiously,” Professor Robert McMahon, professor of chemistry and associate editor of The Journal of Organic Chemistry, says.

In the mid-1980s, Phil Certain, who was chair of the Chemistry Department, suggested that Weinhold and Zimmerman meet for lunch to discuss the commonalities of their research. One meal turned into more than 20 years of Friday lunches at Paisan’s and Porta Bella and innumerable discussions about chemistry, theory, and computation.

For the then junior faculty member, this was “an opportunity to interact with one of the giants,” Weinhold says. “I think it always amused people to see a physical chemist and an organic chemist going off together to talk about chemistry.”

“Frank is a physical chemist involved in theory, and Howard was – in many ways – ahead of his time as an organic chemist who understood theory,” McMahon says.

Over time, the professors became valuable sounding boards for one another.

The article included in this issue of JOC was a draft Zimmerman and Weinhold had worked on together but had never finished. They had collaborated on an article, “Use of Hückel Methodology with ab Initio Molecular Orbitals: Polarizabilities and Prediction of Organic Reactions,” for the Journal of the American Chemical Society in 1994, and this second paper expands upon the first.