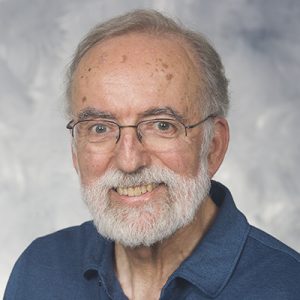 Professor Moore is the former W. T. Lippincott Professor of Chemistry. He received his doctoral degree in chemistry from Northwestern University in 1965, spent a postdoctoral year as a NSF fellow at the University of Copenhagen, and was a member of the faculty at Indiana University and Eastern Michigan University before coming to the University of Wisconsin-Madison. Moore’s career has been devoted to creating and evaluating better tools and processes by which students can learn chemistry. As a result of pursuing that goal he has been a leader in the field of chemistry education for more than 40 years.

In the late 1960s, Moore recognized the promise of digital computers to improve instruction, despite the crude IT tools then available. In 1969 he created and used in a large chemistry lecture course a computer-based testing system that was precursor to online home­work systems offered by all textbook publishers today. In 1976 he was invited by UW-Madison to oversee presentations on computer-based education at the Fourth Biennial Conference on Chemical Education. By 1979 his drive to expand the use of computers in education led him to found and edit the Computer Series, a monthly column in the Journal of Chemical Education that described and disseminated computer-based educational innovations. Moore expanded dissemination of computer-based learning materials via NSF-sponsored Project SERAPHIM, which he founded in 1981 and led for roughly four decades.

In 1989 Moore joined the chemistry department at UW-Madison as Director of the Institute for Chemical Education. He expanded the Institute’s activities, collaborat­ing with other chemistry faculty and with the NSEC and MRSEC centers. He expanded the topics offered in summer Chemistry Camps, disseminated model kits, solar-cell kits, and other hands-on instructional materials by the tens of thousands, developed materials and imple­mented programs, such as SCIENCountErs, directed toward groups underrepresented in science, and created virtual summer camps for children when the COVID pandemic required cancellation of summer outreach activ­ities. In the 1990s, Moore led departmental colleagues as PI of the New Traditions NSF-sponsored curriculum reform project, one of five in the country. From 2013 to date, Moore has collaborated with Bob McMahon to obtain state approval for and spearhead design and construction of a $140 million instructional facility.

To provide increased stature and recognition for authors of IT-based instructional materials, in 1988 Moore founded and edited the first peer-reviewed scientific journal published entirely electronically: Journal of Chemical Edu­ca­tion: Software. This led to a major NSF-sponsored project, the Chemical Educa­tion Digital Library, an integral component of the multidisciplinary National Science Digital Library. The ChemEd DL collected and dissemin­ated hundreds of online learning materials for high school and college chemistry, together with pedagogical document­ation showing how best to use them.

In 1996 Moore became the CEO and seventh editor of the Journal of Chemical Education. He reorgan­ized the JCE’s editorial and production activities to enhance digital production of issues, developed new features, shortened times to publication, digitized the entire set of back issues as well as each current issue, and strengthened ties between the JCE and the American Chemical Society. This led the ACS to become publisher of the JCE at the end of his tenure as editor and CEO.

Moore has published 114 papers, organized 116 workshops and symposia, and co-authored a pioneering book on environmental chemistry, a graduate-level textbook on chemical kinetics, three textbooks for general chemistry, and an online OER interactive learning system. He is a fellow of the AAAS and the ACS. Moore has received the Wisconsin Power and Light Underkofler Award for Teaching Excellence from UW-System, the Van Hise Outreach Teaching Award and the Benjamin Smith Reynolds Award for Excellence in Teaching Engineers from UW-Madison, and the Upjohn Faculty Teaching Award from the UW-Madison Chemistry Department. National awards include the ACS George C. Pimentel Award in Chemical Education, the James Flack Norris Award for Outstanding Achievement in the Teaching of Chemistry, the Catalyst Award of the Chemical Manufacturers Association, the Talbot Prize from the Society of Academic Authors, the Pirelli Internetional Award for outstanding multimedia work, and the MERLOT Award for Exemplary Online Learning Resources.