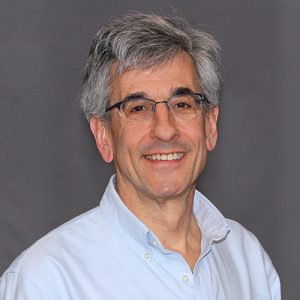 We are broadly interested in the design, synthesis and evaluation of new types of molecules intended to display interesting structures and useful functions. In addition, we seek to understand how proteins, the most diverse class of biomolecules, perform their natural functions. Our efforts require a wide range of experimental tools, including asymmetric organic synthesis, polymer synthesis, solid-phase peptide synthesis, high-resolution NMR and crystallographic analysis of molecular structure, protein expression biochemical assays, and cell-based assays. Our research program is highly collaborative.

Foldamers
Nature teaches us that folded oligomers can be very powerful molecular machines, as exemplified by proteins and nucleic acids. “Foldamers” are unnatural oligomers that adopt compact, specific and predictable shapes. The foldamer approach represents a new strategy for designing molecules that display specific functions. We are interested in developing foldamers that mimic the shapes of natural peptides or proteins, for biomedical applications, and in foldamers that adopt unprecedented shapes. We have learned a great deal about oligomers of beta-amino acids (“beta-peptides”) and oligomers containing both alpha- and beta-amino acid residues (“alpha/beta-peptides”), which makes these systems suitable for goal-oriented design efforts. We have shown that properly designed helix-forming foldamers can disrupt protein-protein interactions associated with viral infection or cancer.  Long-term goals include generating foldamers with specific tertiary folding patterns and catalytic activities. (left) Crystal structure of an alpha/beta-peptide foldamer bound to a target protein; this foldamer is a potent inhbitor of HIV infection (PDB 3O43). Our foldamer research includes a substantial synthetic effort.  Currently we seek efficient asymmetric routes to gamma-amino acid building blocks; one recent success is illustrated below. A number of challenging targets remain. We use these new building blocks to establish conformational behavior of new foldamer families that contain gamma-amino acid residues. Of particularly interest is our recent discovery of an alpha/beta/gamma-peptide scaffold that provides very effective mimicry of alpha-helices.

New tools for studying the origins of protein folding preferences
We want to understand how the sequence of a protein determines the folding pattern adopted by the polypeptide chain. We have developed a new method for probing protein conformational stability, “backbone thioester exchange,” which we use to ask fundamental questions about the origins of protein folding preferences. For example, we are evaluating the ‘rules’ that determine how helical segments pack against one another. Another set of tools developed in our laboratory enables us to generate small parallel beta-sheets that fold autonomously in aqueous solution, which allows us to establish sequence-stability relationships for parallel beta-sheet secondary structure within proteins.  New synthetic amphiphiles we have created are proving to be broadly useful for the manipulation and characterization of intrinsic membrane proteins.

A synthetic peptide that adopts a parallel beta-sheet conformation in aqueous solution, as established by 2D NMR, because of the unnatural linker that connects the two peptide strands.

Design of biologically active polymers
We are exploring materials generated via ring-opening polymerization of beta-lactams. The resulting poly-beta-peptides (also known as nylon-3 polymers) have a protein-like backbone, which should make them biocompatible. We have recently shown that co-polymers in this class can mimic the selective antibacterial activity of natural peptide antibiotics. We are currently exploring polymers in this class as antimalarial agents, antifungal agents, lung surfactant mimics and scaffolds for tissue engineering.

Synthesis of a family of sequence-random nylon-3 polymers, some of which mimic the antimicrobial properties of host-defense peptides.