This is an accordion element with a series of buttons that open and close related content panels.

For his work on the activation of C-H bonds of hydrocarbons by soluble transition-metal complexes, alumnus Robert Bergman (Ph.D. ’66, Berson) receives the Wolf Prize in Chemistry.
2017
Judith Burstyn is department chair

To draw diverse perspectives to the university, the department launches the Chemistry Opportunities Program (CHOPs). The program seeks to recruit under-represented students to the department.

During this time period, Professor Bassam Shakhashiri leads the American Chemical Society as president. His major initiatives include helping to advance graduate education in the chemical sciences and educating the public about climate change.

Professor Charles Casey is American Chemical Society president in 2004. His major presidential initiatives include demonstrating the value of chemistry to the public and advocating for science education.

In recognition of his leadership in synthesizing an enzyme for the first time, alumnus Ralph Hirschmann (Ph.D. ’50, Johnson) receives the National Medal of Science.

For his work on the discovery and development of conductive polymers, alumnus Alan MacDiarmid (Ph.D. ’53, Hall) is named a co-recipient of the Nobel Prize in Chemistry.

The Shain Tower is named in honor of Professor Irving Shain, a former department chair and university chancellor.

Casey later serves as president of the American Chemical Society (2004)

For his research on kinetic theory, transport phenomena, and the behavior of polymeric fluids, alumnus R. Byron Bird (Ph.D. ’50, Hirschfelder) receives the National Medal of Science.

During this time period, Professor Bassam Shakhashiri works as assistant director of the National Science Foundation (NSF) Directorate for Science and Engineering Education

The Institute for Chemical Education (ICE) was founded in 1983, in an effort to help science educators develop and share their ideas.

Certain later serves as dean of the College of Letters & Science.

Alumnus Gilbert Stork (Ph.D. ’45, McElvain) receives the National Medal of Science for his role in the discovery of various synthetic reactions which have made possible the synthesis of important biologically active compounds.

For his major contributions to the elucidation of the complex chemistry of steroid hormones and their application to oral contraceptives, alumnus Carl Djerassi (Ph.D. ’45, Wilds) receives the National Medal of Science.

For his contribution to the understanding of the connection between chemical structure and catalytic activity of the active centre of the ribonuclease molecule, alumnus Stanford Moore (Ph.D. ’38, Link) is named a co-recipient of the Nobel Prize in Chemistry.

The Daniels Building opens soon after, in 1968; the two buildings are named for former department chairs J. Howard Mathews and Farrington Daniels.

Regarded as a pioneer in the field of photochemistry, Professor Howard Zimmerman spends 40 years at the university and takes pride in helping prepare students for careers in research.

In the late 1950s as director of the CIC, Professor Paul Bender establishes classes to teach students to use the instruments. The center, which opened in the 1920s, provides exceptional access to world-class instruments, services, and instruction to this day.

Second ultracentrifuge in the U.S. arrives on campus

The instrument has assisted in projects ranging from the development of the plastics industry to the purification of gamma globulin.

As chair, Mathews encourages the exploration of new areas of chemistry, including colloid systems. During this era, the university hosts Swedish chemist Theodor “The” Svedberg, a leading experimentalist who conceives the ultracentrifuge.

Professor J. Howard Mathews had earned a bachelor’s at UW-Madison and had been a founding member of Alpha Chi Sigma. The department’s reputation continues to grow during Mathews’ 33-year tenure as chair.

Nellie Wakeman is the first woman to receive a doctorate in chemistry at UW-Madison. Her adviser is Professor Edward Kremers, a pharmaceutical chemist.

Professor Louis Kahlenberg (B.S. 1892, M.S. 1893), who joined the faculty in 1895, served as department chair from 1907-19, and is credited with initiating the first renaissance within UW-Madison chemistry.

Azariah Thomas Lincoln receives the first doctorate in chemistry at UW-Madison under the supervision of Professor Louis Kahlenberg.

Louis Kahlenberg, who joined the faculty in 1895 and later served as chair, becomes the first professor to develop a visible and ongoing research program.

Professor William W. Daniells, who held classes in the basement of Bascom Hall, becomes the first department chair in 1880

The department was officially established in 1880 and was chaired by Professor William Willard Daniells. UW-Madison as a whole saw a growing emphasis on science during this era, under the leadership of university president John Bascom.

The first chemistry courses, taught by S. Pearl Lathrop, meets in North Hall. As an instructor, Lathrop seeks “to expand the mind, moralize the heart … and to prepare youth for public as well as private action.” 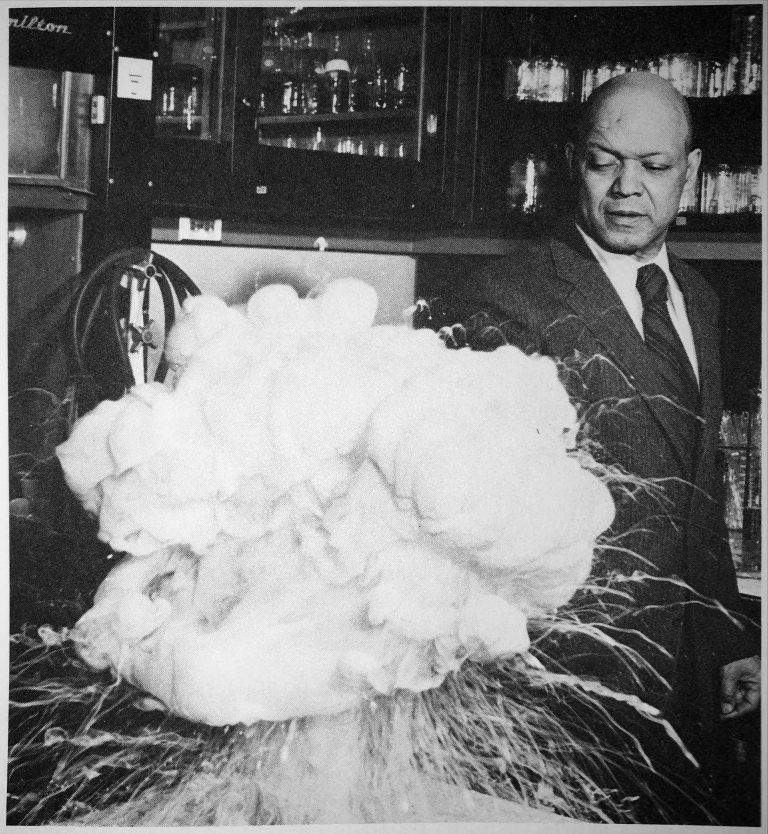 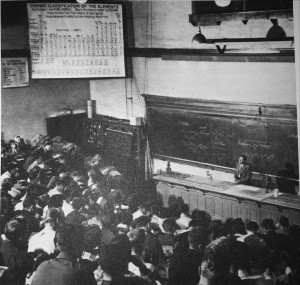 In 1854, S. Pearl Lathrop taught the first chemistry course in the newly constructed North Hall, just off the shores of Lake Mendota on the University of Wisconsin-Madison campus.

The department was officially established in 1880 and was chaired by Professor William Willard Daniells, who held classes in the basement of Bascom Hall. UW-Madison as a whole saw a growing emphasis on science during this era, under the leadership of university president John Bascom.

Professor Louis Kahlenberg (B.S. 1892, M.S. 1893), who joined the faculty in 1895, served as department chair from 1907-19, and is credited with initiating the first renaissance within UW-Madison chemistry. Following graduate studies in physical chemistry at the University of Leipzig (Germany), Kahlenberg returned to UW-Madison and became the first chemistry professor to develop a visible and ongoing research program. 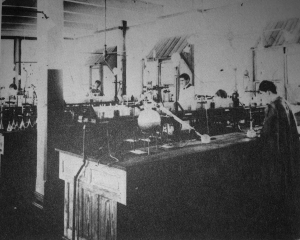 After Kahlenberg, Professor J. Howard Mathews was named chair. He held the position for 33 years and oversaw the department’s second renaissance as it grew into what his successors would later call a “great department.”

In addition to recruiting talented faculty, Mathews aimed to have his faculty explore new areas of chemistry. One such area was colloid systems, and the department hosted Swedish chemist Theodor “The” Svedberg, a leading experimentalist in the field, in 1923. While Svedberg was at UW-Madison, he conceived the ultracentrifuge, which assisted in scientific projects that ranged from the development of the plastics industry to the purification of gamma globulin. In 1937, UW-Madison became home to the second ultracentrifuge in the U.S., the first in a university setting.

That same year, renowned chemist Professor Joseph Hirschfelder, the founder of modern theoretical chemistry, joined the faculty. Once established in the department, Hirschfelder founded the Theoretical Chemistry Institute. The Institute now awards the internationally recognized Hirschfelder Prize in his honor. Hirschfelder was awarded the National Medal of Science by President Gerald Ford. 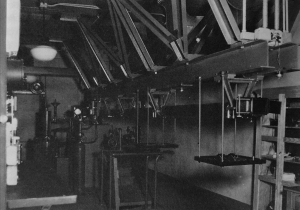 The Chemistry Instrument Center was established in the 1920s under the direction of Professor Villiers Meloche. The center grew over the decades, with Professor Paul Bender taking over in the late 1950s. As director, he opened access to the center’s sophisticated analytical instruments to other scientists and established classes that taught students to use the instruments. In 1993, the center was named in Bender’s honor, in recognition of his role in creating a premier center that continues to provide exceptional access to world-class NMR, ESR, mass spectrometry, and X-ray crystallography instruments, services, and instruction.

In 1960, Professor Howard Zimmerman joined the department; he is regarded as a pioneer in the field of mechanistic organic photochemistry.

The department has hosted dozens of visiting scholars from around the world. In 1962, Professor Harlan Goering established a program for visiting organic chemists and since 1999, the visiting professorship has been named in his honor. 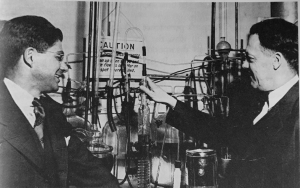 The Institute for Chemical Education (ICE) was founded in 1983, in an effort to help science educators develop and share their ideas. The Wisconsin Institute for Science Literacy (WISL) outreach program soon followed and aims to promote understanding of science, math, and technology among the public.

Before moving to its current location at the heart of campus on University Ave. at Mills Street in 1962, the department made its home in Chamberlain Hall, Science Hall, Old Science Hall, Bascom Hall, South Hall, and of course, S. Pearl Lathrop’s lab in North Hall. 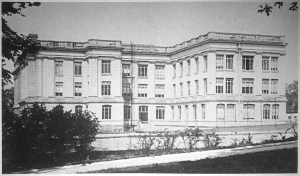 Today, the Department of Chemistry is known for its outstanding teaching, research, and outreach programs as well as its collegial and collaborative atmosphere. Whereas research in the department once fell neatly into the four traditional areas of chemistry, today’s chemistry students work on research projects that transcend traditional divisions. They collaborate with researchers in other groups, departments, campuses, and with researchers in industry. These collaborations have led the department to offer new areas of study, including chemical biology and materials chemistry.