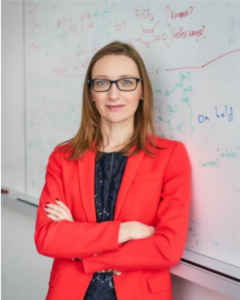 Cristina Nevado was born in 1977 in Madrid, where she graduated in chemistry at the Autónoma University in 2000. In October 2004 she received her PhD in organic chemisty at the same university working with Prof. Antonio M. Echavarren in the cyclization of enynes catalyzed by platinum and gold complexes. In December 2006 she joined the group of Prof. Alois Fürstner at the Max-PlanckInstitut für Kohlenforschung (Germany) where she was part of the team who conquered the first total synthesis of Iejimalide B, a marine macrolide possesing a very sensitive architecture. In May 2007 she started her independent career as an Assistant Professor of Organic Chemistry at the University of Zürich. In 2011, Cristina was awarded the Chemical Society Reviews Emerging Investigator Award and the Thieme Chemistry Journal Award in recognition of her contributions in the field of synthetic organic chemistry. In 2012 she received an ERC Junior Investigator grant and has been awarded the Werner Prize of the Swiss Chemical Society. In 2013 she become Full Professor. Among her many contributing roles to the community, Cristina is currently Senior Associate Editor for ACS Central Science and for Organic Syntheses. Rooted in the wide area of organic chemistry, her research program is focused on complex chemical synthesis and new organometallic reactions.